Let’s see how it could change business work forever.

Perhaps we have just stumbled upon a potential name for Apple’s next product. Bloomberg reported on Sunday that companies affiliated with the firm had trademarked the terms “Reality One,” “Reality Pro,” and “Reality Processor” in several countries, including the United States.

In early 2021, rumors began to circulate that Apple was working on a mixed reality headset equipped with 12 cameras to monitor your hands and eyes. Supposedly, it could cost $3,000. It’s been given the internal codename “N301,” which stands for “no price tag.”

The Information reported in February 2021 that Apple’s M1 chips would power the device and that the headset would also feature Lida technology—the same system that powers Apple’s iPhone 12 Pro.

An Apple headset would go up against others like Facebook’s Oculus Quest and Sony’s PlayStation VR in the race to the top of the metaverse. In 2021, Facebook established a new subsidiary called Meta to demonstrate its commitment to the emerging technology’s goal of incorporating a sense of location into social interactions.

Before any of us had ever heard the word “Covid,” several trends were already developing that was accelerated by the pandemic. One such trend was the increasing popularity of teleconferencing.

As old-school corporate America pushes to have employees return to the office, employees are pushing back.

What disadvantages do remote jobs have?

There are some real, tangible drawbacks to working remotely. If you work from home, you may find it more challenging than your coworkers who are in the same room to feel like an integral part of the office team. It’s also more challenging to train staff on new hardware or software, as screen sharing during a presentation can only go so far. Hardware adoption and replacement rates are at an all-time high, meaning businesses must find a more efficient way to familiarize new hires with the company’s technology and update current employees on any hardware upgrades.

The use of Augmented Reality can help with those issues.

With Augmented Reality, remote workers won’t feel like they’re just a square on a screen, but rather a part of a real-life meeting. Virtual reality is a useful tool for teaching people how to use new technology while they are still in their homes. AR eliminates the need for a shared screen by putting the trainer in the trainee’s line of sight and allowing the trainer to annotate the trainee’s view with labels and diagrams.

Innovative tools like augmented reality will make remote work easier in the future, as many foresightful people have long suspected. The pandemic only sped up the schedule for a transition to remote work, and it prompted reactions from the major players in the sector, who subsequently sped up the development of their technologies.

Integration of the whole picture.

Using a hands-free headset is the key to experiencing many of AR’s truly paradigm-shifting benefits. The user’s real-world field of view can be enhanced without them having to look through the lens of a portable device like a smartphone or tablet. As of yet, none of the available gadgets have proven useful enough for widespread adoption beyond the dedicated early adopters who exist in every field of technology. The commercialization of augmented reality technology would take a giant leap forward if consumers were able to finally get their hands on an affordable highly functional AR-enabled headset, like the “Reality One” from Apple.

The rumored augmented reality smart glasses by the company are projected to hit the market in the next couple of years.

At Concannon XR, our experts help businesses just like yours develop an XR strategy designed to drive profitability and positive outcomes.

Contact us today to learn more about how we can improve your training and tech support with XR technology. 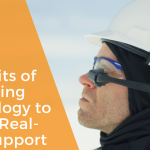