With VR quickly making inroads among remote teams around the world, there is a growing need for apps that enable collaboration.  At Concannon XR our remote team uses VR for meetings, discussions, and team events.  We’ve spent the last few months evaluating many different collaboration apps targeted at enterprise teams to find which ones work best for a few different use cases.  Here are the three we currently like best along with our thoughts on each.

The team behind MeetinVR set out to create a VR app that largely duplicates the most common real-world meeting settings and interactions.  As a result, the app has an interesting mix of fixed-place rooms and free-roam rooms.  For example, in the virtual board room users can only “sit” in designated positions around the table while in the idea space users can move around wherever they want.  As a result, we found MeetinVR to be best suited to teams that want to run more traditional meetings in VR.  It works well to alleviate “Zoom fatigue”, but isn’t quite as focused on 3D sharing and visualization as other apps we tested.

The user controls in MeetinVR were some of the most intuitive we used.  Grabbing objects and casually tossing them away to remove them from the VR space just felt right, and clicking interface buttons worked a bit better than in some other apps.  For meetings where you need the team to focus on specific content rather than freely move around and interact with other parts of the room, the seated position spaces are a nice touch.  The web interface for setting up and managing team members, meetings, and files, also works well even though it’s fairly simple.

If your team is looking for a way to collaborate in free-form VR creative working spaces, Glue might be the right choice for you.  Its wide variety of collaboration spaces are mostly targeted at teams that need to interact with each other in stand-up meetings that occasionally break out into side conversations.  Like the other apps we reviewed, Glue allows sharing 3D models, drawing in both 2D (on whiteboards) and 3D (in mid-air), and presenting content to virtual screens in the available rooms.  Available spaces range from creative office areas to beachside firepits, allowing teams to choose the mood they want for different meetings.

The Glue team took an interesting approach to avatars that we really like – they’re not so realistic that they hit the uncanny valley, but also not so cartoonish that they seem childish.  It’s a happy medium that just works.  Sound quality in Glue is also quite good, with excellent 3D positioning and clarity, as well as avatar lips (and some expressions) synced to what’s being said by users.  For our use cases we also like the types of collaboration spaces available, especially the creative office environment that has a good combination of standing meeting area, big whiteboards, and side rooms for breakout sessions.  The web-based management interface is also well organized and easy to use.

Unlike some of the other collaboration apps we tested, Spatial is really designed to be used for 3D file sharing, design, and commenting more than for run-of-the-mill corporate meetings.  As a result, its user options and interface are a little bit different and take some more getting used to.  However, with that purpose comes more options and display fidelity for 3D models as well as some additional markup and commenting options.  Teams can also use Spatial for general meetings and discussion sessions without any issues, and it has some features focused on Kanban and similar flow-based project sharing.  While other apps also allow computer users to join VR headset users in virtual spaces, Spatial is pretty heavily designed for this use case.

3D model representation in Spatial is top notch, with textures and colors coming across clearly.  It really shines if you need to show team members or clients a VR representation of a physical product you’re working on.  Some members of our team also liked that avatars look fairly similar to each team member, although the quality is fairly low since avatar models are generated from 2D pictures.  The web browser also works a bit better than in other apps we tested, allowing team members to share online documents and videos easily, or to pull in additional project info and files without needing to go through the process of importing items via the web admin interface manually.

While we’ve generally been impressed with the state of VR collaboration apps, there are still a few areas that can be improved across all the apps we tested.  Some of these are already being worked on by the developers we spoke with, but others will require some more development as the technology advances.

Much like how interface changes can make navigating video chat apps like Teams, Zoom, and Google Meet tricky for users swapping between them, every collaboration app we tested had a slightly different way of interacting with tools and for moving about 3D spaces.  This made it tricky to remember which controller buttons did what as we used different apps on different days.  We’re hoping that over time apps will standardize around a common interaction model.

Starting with entering meeting codes and continuing through creating sticky notes and navigating browser windows, VR collaboration still requires a fair amount of text input from users. Unfortunately, there’s just no good way to do it right now.  Tapping an on-screen keyboard or writing out things long-hand, often having to pull off a headset to see a text code on another screen, is not pleasant.  We’re really hoping for speech to text and Bluetooth keyboard integration soon to make this less painful for users.

Our team loves whiteboards in the physical world, but tends to avoid them in VR.  The first reason is lack of haptic feedback.  Without physical resistance, it’s hard to tell when a virtual marker is actually touching a whiteboard, which makes it easy to mess up what you’re trying to write.  Additionally, real-world markers use your fingers as much as your arm for nuanced control, but the only way to use markers in VR is by moving the entire controller (any by extension your whole arm) around.  Forget about writing nice, small words, you’re going to be doctor scrawling big text and getting tired doing it.  A lot of times it’s easier to use the 3D pen tools instead.

One of the things we’ve been playing with is using VR collaboration apps for team meetups and “off-site” activities.  While it’s currently possible to create basic team building activities like scavenger hunts and puzzle assembly, we really wish the apps had the option to enable basic physics for imported 3D objects.  This would allow users to toss a ball around, stack blocks, play bowling, etc.  It would make less-formal meetups a lot more fun.

We’re already pretty happy with VR collaboration apps and are actively using them for our own meetings as well as some client meetings.  While there are definitely some areas for improvement, hopping into a VR meeting with your teammates is a lot more fun and significantly more engaging than sitting through another Zoom or Teams meeting.  We think that VR collaboration apps are a core part of an enterprise VR app suite and love helping our clients get setup with them.  If you’re interested in testing out enterprise VR apps for your business, we can help you get started – just contact us. 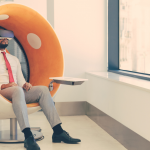 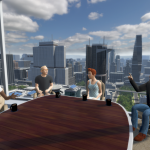 Virtual Meetings: The Future of Collaboration